Our advanced blueEHR electronic health solution is the result of physician and industry feedback.

Includes only 1 clinical user All office staff are FREE

Includes up to 2 clinical users All office staff are FREE

Includes up to 3 clinical user All office staff are FREE

Includes up to 6 clinical users All office staff are FREE

Up to 12 clinical users All office staff are FREE

Need a Custom Package or Quote - or - Want HITaaS Pricing for a Custom Health IT Solution?

If the pricing above does not work for you; if you are a solo practice or even a multi-location or multinational health system – or if you simply want the APIs to build and deploy your own custom health IT solution, just let us know. Our team is ready and willing to help make blueEHR work for you. Just ask!

Bringing Technological Innovation to Family Medicine: How a technophobic family physician embraced health IT and became and evangelist for electronic medical records

The idea of the “family doctor” – a healthcare practitioner that treats multiple generations of a family – is so ingrained in the consciousness of most Americans that the mere mention of the profession conjures up the work of Norman Rockwell. Though the family doctor is losing ground in the evolving era of highly specialized care, such doctors still exist and their practices serve a vital role for their communities. One such practice is that of Dr. Satinder S. Bhullar, who has been treating families in the Wheeling, WV area for over four decades.

After serving a tour of duty as an Army doctor in the Vietnam War, Dr. Bhullar settled in the small West Virginia community that would become his home and where he would become a pillar of his community. After practicing for 20 years in a large clinic, Dr. Bhullar began his own practice in 1991 that has since expanded to a second location. Families in his community have come to trust him as their family doctor and rely on his medical expertise from one generation to the next.

Dr. Bhullar prides himself on his family-friendly, patient-centered approach to medicine. Yet he and his wife Tej realized that if they were to continue to offer the best possible care, their office could no longer resemble a Rockwell painting. Despite some trepidation on the part of a physician who relied heavily on pen and paper and memory, a change was needed if their practice was going to survive. The time had come to embrace health IT and bring the practice into the 21st Century.

Dr. Bhullar entered the medical field in a time before computers. Like many of his generation of doctors, Dr. Bhullar never learned to embrace technology into his practice. Tej recalls her husband’s early experiences with health IT – like the use dictation software to transcribe his notes in an electronic format – that were less than satisfactory. Translation errors occurred over 40 percent of the time, resulting in far more time consumed than was saved in correcting errors.

Despite this rocky start, Dr. Bhullar recognized that with Department of Health and Human Services new regulations requiring practices receiving Medicare and Medicaid reimbursements to begin using an Electronic Medical Record system (EMR), his offices had to modernize, adapt and adopt an EMR system despite their initial reservations. The process of implementing an EMR can be daunting for any physician – but is especially daunting for physicians who are so accustomed to their own work habits, manual processes and paper charts.

Tej became more involved in her husband’s practice and the de facto project manager for the transition to an EMR system for the practice. She and her husband had heard stories from other doctors about the difficulties they experienced with earlier versions of EMR software, including a steep and difficult learning curve, mixed performance and lost billing revenue during the transition to electronic records. Tej was determined to oversee a successful transition into a modern medical practice with a fully integrated EHR system without losing their personal approach to care.
After visiting some colleagues’ offices that were already using EMR, she realized that they needed a software solution that would not only be effective but would also be easy to learn and implement. ZH Healthcare was selected in large part because of its ease of implementation and its ease of use.

The ZH Healthcare (blueEHR) solution takes a different approach than most costly, difficult and confusing EMR software. Rather than being proprietary and restrictive, the ZH Healthcare solution is built with a framework that supports openness, allowing the solution to operate in the cloud and on Windows, Linux, Mac and many other popular operating systems and platforms. Further, the solution is simple and intuitive, and allows you to customize, leverage APIs, and more which help practices like Dr. Bhullar’s adopt ONC and Meaningful Use-compliant EHR systems without the need of heavy capital investment or burdensome training.

Tej now insists that without ZH Healthcare, EMR implementation could not have been completed in their practice. Because of the simplicity of the program, the support of the program and the ease in which it was incorporated into the practice’s workflows, both Tej and Dr. Bhullar have since become converts to the cause of health IT and evangelists for the ZH Healthcare (blueEHR) solution. Their practice now meets HHS requirements for current “meaningful use” standards for an EMR, and is even prepared for the next phase of meaningful use implementation because of ZH Healthcare’s open and advanced platform. Additionally, their own internal processes have become much more efficient, resulting in better patient care and less time spent processing data such as billing records.

Despite initial trepidation, Tej and Dr. Bhullar have now fully embraced the platform. With ZH Healthcare and the blueEHR platform, Dr. Bhullar can use simple diagnostic codes for Medicare billing ensuring that the right patient receives the right care and the practice is billed accordingly. Additionally, Dr. Bhullar now has the freedom to scan his hand-written notes into patient records without the need for dictation software that led to so many errors and so much frustration previously.

ZH Healthcare’s blueEHR platform also provides Dr. Bhullar and his staff the ability to customize report templates for their office, enabling them to better meet the needs of their patients.

Dr. Bhullar’s successful transition to EMR has caught the attention of other physicians in their area. Like Dr. Bhullar himself, many of his colleagues have limited experience with complex IT solutions or even computers in general. Based on Tej and Dr. Bhullar’s positive experiences selecting, implementing and using the ZH Healthcare blueEHR platform, other practices have selected ZH Healthcare and the solutions based on the Bhullar’s recommendation. Additionally, Tej notes that the expected loss of income during their transition to EMR never happened, in large part because of how simple it was to integrate the blueEHR platform into their practice and embrace the new technology.

It has worked so well the Bhullars have requested that their outsource billing company begin using the ZH Healthcare program to process all of Dr. Bhullar’s patient billing.

Like a family physician that sees himself as part of his patient’s life, the ZH Healthcare blueEHR solution is now a fully integrated part of Dr. Bhullar’s practice – one the has delivered benefits to both himself and his patients. He is not only setting an example of excellence in patient care for the new generation of physicians following after him, he is also setting an example for those of his own generation who have been reluctant to transition to using an EMR. 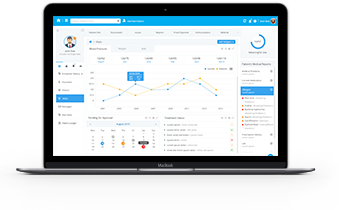 This one-on-one demonstration will walk you through a day in the life of how a physician, office manager, or biller use blueEHR to make their practice more productive