Data Aggregation and Its Importance: A WHOOP Experience

Even though I had tracked the same amount of sleep today morning and Tuesday morning, my recovery rate for the former was twice that of the latter. Well, this is where the data aggregation of an app like WHOOP comes in useful.

See, due to living the active social lifestyle of a 25 year old, my recovery rate on Sunday morning was 12%. This meant that, even though I rested all of Sunday and got nearly 7 hours of sleep on Sunday night, I only had a 24% recovery rate. Then, on the same day, I also biked for nearly 30 minutes, as well as do an hour of intense, conditioning based bodyweight workout.

As you know, the body is not a machine. It doesn’t reset every day. It accumulates everything you do. So, due to these factors, my recovery rate was low. In contrast to this, there was yesterday. Due to a CrossFit injury I suffered Tuesday, I was in pain and had to be on bedrest. Other than going out to get dinner, I spent all day in bed. This gave my body, for the first time in almost a week, a chance to rest and rehabilitate.

What did this do? Even with the insufficient sleep I got, I woke up feeling rested. Even though the spot where I’m injured hasn’t been fixed completely, it is feeling better. A lot of the soreness and tension I felt throughout my body has been alleviated.

This was all figured out and understood thanks to a small device on my wrist and an app on my phone, which combined together, gave me enough data for me to be able to come to a hypothesis that can be tested and would probably give the same result. 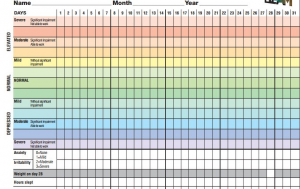 Now the really interesting part is when you aggregate the data from WHOOP, with other data. For instance, I keep a mood chart as part of my strategy to keep Bipolar disorder under control. The mood chart, asks how much sleep was had, if medication was taken and what the stability was like for the day.

On its own, all it can tell is how sleep and medication affects emotion. But, what if you also add in the factors that WHOOP tracks? Maybe the reason for a lower recovery rate on Tuesday is because medication wasn’t taken properly on Monday night and it caused a change in brain activity, which affected the body.

What’s the lesson to be learned here? Well, I’m not a healthcare professional. I’m not qualified to answer that. But, if I was to take this data to my psychiatrist or my primary care physician, they would be able to analyze the data to make appropriate assessment.

Instead of having to ask me questions and hoping that my memory of events is right, they would have cold, hard data that can be processed and analyzed and would give them the best possible chance of an accurate diagnosis and treatment plan.

This might sound like fear mongering, but the truth is that you never know when disaster strikes and you need this data. I was 22 when I was officially diagnosed as Bipolar. Up until then however, there had been signs and instances of symptoms of Bipolar. But, because I moved around a lot, I was seeing new doctors, who didn’t know about the symptoms. If they had, maybe I could’ve received treatment earlier and a lot of the suffering I went through could’ve been prevented.

Data aggregation is not the sexiest solution to keeping people safe. It’s not the first choice. But, it is the best choice. We, humans, are made up of so many, many different pieces. We can’t treat just one and hope the other is fine. We need to treat it as a whole. For this, we need to have information about the whole.