On October 12, 2017, President trump issued an Executive Order that alters some of the provisions of the Patient Protection and Affordable Care Act, a.k.a Obamacare.  The objective is stated as “promoting healthcare choice and competition across the united states.” 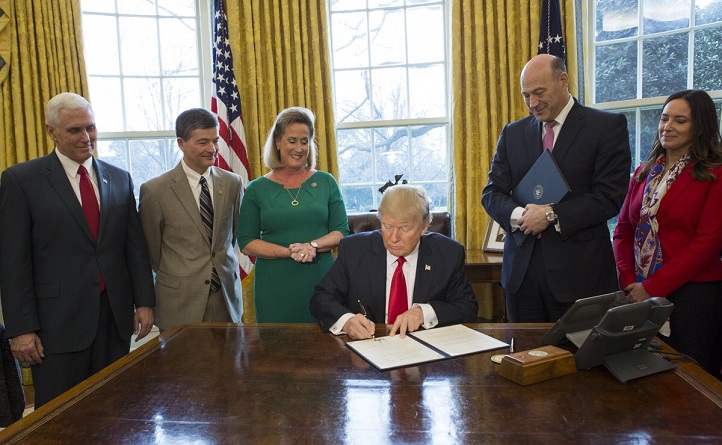 Here is how each one changes:

AHPs – The executive order enables an expanded interpretation of the term Association, thereby allowing organizations or businesses with very limited commonalities to form associations to band together to bargain for better deals.

STLDI – The term to offer STLDI is expanded from a limit of 90 days to a year and more.  This allows people with lesser need for insurance, mostly young and healthy,  to opt for STLDI at lesser premiums.  Originally STLDI was meant to tide over short term difficulties like being in between jobs.

HRAs – The executive order has expanded the flexibility of the HRAs.

Critics argue that the AHPs and STLDI modifications could lead the young and healthy to lesser premium options and thereby saddle the sick and needy with higher premiums. Each of the three areas above also have some waivers to circumvent the onerous requirements of the Affordable Care Act, like the preexisting condition provision.

Since Congress can’t get its act together on HealthCare, I will be using the power of the pen to give great HealthCare to many people – FAST

Many people are writing about these provisions in Trump’s Executive Order…. But what about the technology side? It was under the Obama administration that Electronic Health Records technology became a requirement.So, would Trump’s order affect the expensive Electronic Medical Records systems that has already been installed in most of the care provider facilities?

It is important to note, and follow, Section 1.c. (iii) of the Executive Order which states that rules and guidelines should “improve access to and the quality of information that Americans need to make informed healthcare decisions, including data about healthcare prices and outcomes, while minimizing reporting burdens on affected plans, providers, or payers.”

If we simplify that jargon: the rule re-emphasizes the importance of data records and the reliance that the government places on such systems.

There is a larger point that needs to be recognized by healthcare organizations: the law is changing. (In fact, just yesterday, lawmakers proposed another change to healthcare policy.) Rules are being written and re-written.  Entire procedures are changing.  With MACRA and MIPS, the industry is moving away from a fee-based system to value-based care.  And with any administration change, there are bound to be other major shifts that will happen.

So ultimately the question that each CIO and CTO in our industry needs to ask is this: “does our system have the capability to  adapt to changing requirements of laws and regulations.  Will it become obsolete?”

Many of the EMR systems in the market currently are so rigid and inflexible that many practices and organizations have already had to abandon their well-developed workflows to fit in with the requirements of newly implemented systems. Do organizations in the healthcare industry have the tenacity to endure another change? Or perhaps more importantly, should they have to endure another change?

Trump’s order brings to light one of the fundamental questions that needs to be asked when choosing an EHR system or an eHealth solution: “Is it flexible and adaptable?”  The fluidity of the healthcare law itself demands a system that is adaptable.